Get ready for the 2021 Alabama legislative session!

Home › Latest News › Get ready for the 2021 Alabama legislative session! 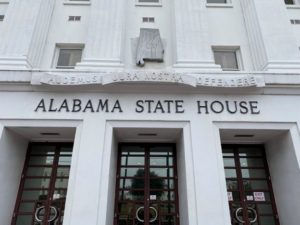 2021 will prove to be the year that America and the spirit that made her great either revives or dies. The reality is that whatever happens will depend on us, better known as “We the People”.

It was recently said that “We are asked to believe that 80 million of us voted to raise our taxes, endorse riots, shut down our economy again, tear down our nation’s borders and flood the country with illegal aliens, kow-tow to transgender, and go whole-hog for draconian Climate Change regulations… and maybe arm Iran with nuclear weapons, if we get around to it. Do you believe the American people really voted for those things?”

Biden himself is no more than an organ grinder’s monkey for a cabal of Far Left crazies who’ll be cranking out his tune. He’s practically gaga, but no problem. If it gets out of hand, he can resign, and we’ll have President Kamala—who dropped out of the Democrat primaries when she couldn’t get as much as 5 percent of the vote.

We are asked to accept this.
I don’t accept it and I do not believe any patriot that believes in constitutional truth, has any sense of morals, a shred of decency, honor or intellect accepts it either.

Lee Dugion said “When “consent of the governed” is replaced by manufactured consent spat out by Dominion voting machines, we wind up with a government that has no need of public support and can ignore public opinion. This is intolerable. This is shameful. This is Communist China—on our turf.

Individually, there’s not much we can do. They don’t need our consent for anything they wish to do.”

As patriots, there is a lot that we can do with the first thing being that we start demanding that our legislators here in Alabama stop the insane gun control laws being pushed down our throats. We have a supermajority of conservative (most profess to be Christians), Republicans in Montgomery. They need to do something positive like passing laws to protect our second amendment rights. They took an oath to defend both the US and the Alabama constitution…period. The Left will not stop. They aim to disarm us because they want to transform America into a third world country run by godless radicals who think secular humanism is god. It obviously is their god, but not mine! They will stop at nothing to get what they want. You do realize that the Left has become the "enemies of the state" don't you?

Having said this it is time to start thinking about your role in helping BamaCarry get bills passed. In 2021 the Alabama State Legislature will convene on February 2, and adjourn on May 30.

We will have the permit-less carry bill on the agenda again. This year it is SB-5 and has already been pre-filed by Senator Gerald Allen. Click the reference above and download your copy. You would think after 8 years a supermajority of constitutionalists would align themselves with the “final authority” where it comes to rights and pass a decent bill. Why have they not? What are they scared of? That is for another day, but I do plan to answer that question.

There will also be the “second amendment preservation act” introduced to thwart the gun grabbers in DC. As I write this there are two versions being drawn up. This bill will make it illegal (with penalties) for any law enforcement agency in this state to enforce federal gun control laws. It will apply the truth in the 10th amendment to resist unconstitutional gun control laws. It is the same tactic that a number of states have used to pass marijuana laws that make marijuana legal in those states. As Madison put it, sometimes we have to “refuse to cooperate with union officers”. In other words, these states stopped enforcing Federal marijuana laws. They took Madison’s advice and “stopped cooperating with union officers”. It is high time Alabama do the same. Federal gun control is unconstitutional…period. It is not one of the enumerated powers given to it. I know lawyers educated in government indoctrination centers will disagree but that doesn’t change the facts. What we want to accomplish is the nullification of gun control law by simply not cooperating with the Feds. Their law then let them enforce it. They do not have the manpower without the aid of law enforcement at the state level.

What we need you to do right now is to be on standby and get ready to flood your representative with phone calls and politely but firmly insist he or she support these gun bills. We will tell you when it is time to act so be ready. If you are not on the BamaCarry email list then please sign up asap by going here. Scroll to the bottom of the page and look to the right.

I believe that you will agree that our elected officials need to represent us by keeping the oath that they took to honor the Constitution both Federal and State.

This year our “supermajority” of Republicans need to get busy removing some of the silly restrictions that have been placed on gun owners and do the job we hired them to do. They should pass laws that secure rights not restrict them. So far they have done little for gun owners. There are some representatives that really want to change what is going on or at least they say they do. They understand the gravity of the situation in this country and where we are headed if we do not stop the bleeding. They need our support and I think when enough of them feel like their constituents are really backing them they will go up against the “old guys” that have held us back from getting good laws passed that protect that which God gave us and the Constitution protects.

I encourage you to get vocal! Be nice but firm in any conversation you might have. When it comes time to call we need to flood our employees with encouraging calls that say, “We want this done!”

Let’s not kid ourselves. 2021 will be full of challenges. Are we up for it?

“But a Constitution of Government once changed from Freedom, can never be restored. Liberty, once lost, is lost forever”.

Watch for future posts and emails about what is coming in the 2021 Legislative Session.

Go ahead now and start preparing. Find your federal and state representatives by clicking here. Get their contact information, especially phone numbers, so that you will have them ready when needed.

4 replies on “Get ready for the 2021 Alabama legislative session!”

Excellent article! I’m standing with every word of it.

Does anybody know how much notice we will get ahead of any hearings on it? Moms Demand Action SHOW UP and we need as many there as possible. The news has been there everytime I’ve been there. We need to organize car pools etc. Most of us work and need advance notice.

Usually a week or so but I have seen it be as little as the day before. Sometimes they will change it at the last minute and I wonder sometimes if this isn’t by design lol.

Good article. I’ll post a link on the county pages I manage.