Are there any believers left in Montgomery?

Home › Latest News › Are there any believers left in Montgomery? 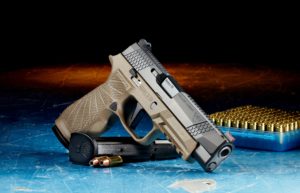 Recently my wife and I went down to our local sheriff’s office and paid to obtain a government permission slip to exercise an inalienable constitutional right, a right that they had NOTHING to do with granting. I’m talking about the right to carry a concealed handgun … for five more years.

What if you had to purchase a 1st Amendment permit to exercise your right to speak freely? What if the government said that you must purchase a permission slip before you can speak freely because what you say might result in rioting in the streets, destruction of other people’s property, or even death? Do you think it would be ok to make you purchase a permit for this reason? What if you had to purchase a license before you could speak publicly, write a book, or post to Facebook?
What about a 4th Amendment permit? What if laws are passed to safeguard you from having your house or property searched? You would first be required to undergo a background check and purchase a permit to avoid authorities searching your home. Would you be ok with this?

For almost seven years, we the people have gone to Montgomery and stated that permits required to exercise a constitutional right are wrong and should be done away with. At best, permits should be voluntary for those who like to carry when they travel through other states that still insist on charging people to exercise their constitutional right. Each year we come away empty-handed.

Why, you ask? That one is easy to answer: Law Enforcement (LE). Our Alabama legislature has many current LE, retired LE, and/or those with STRONG ties to LE. Check for yourself. Each year, they come to committee meetings with their same old red herring fallacies. The main one was officer safety, but they can never answer why a permit makes them safer. It hasn't MADE them any safer, and it never will. Then I saw an email where Bobby Timmons, head of the Alabama Sheriffs Association, in a letter to all the sheriffs in Alabama, told them that they better get busy if they "valued their permit money."

I had always believed it was about “the money.” When I saw the email, I knew then that I had been right all along. It is about the money. I have NEVER understood the power that Mr. Timmons holds over our sheriffs. He is head of a non-government agency that somehow has risen to a place of perceived authority that has not been given to him, nor does his authority exist other than in his own opinion. The sheriffs say they need the money to operate. Let me translate this. “I need the money because it is for discretionary spending,” meaning I can spend it on the department or retire with it. A piece of paper is not going to make any officer the least bit safer. Criminals carry guns, and any adequately trained officer treats all traffic stops with the thought that this driver could be armed. If the officer doesn’t, he is either poorly trained or not a very alert officer. It is the same principle as an officer going on a domestic violence call, only the occupants of the home do not need a permit to have a firearm in their home. Give me a break. The argument for officer safety is smoke and mirrors because it is, and always has been, about the money.

Even though the 2nd Amendment says this right shall not be infringed, we have let the government encroach upon our liberty and they have gotten away with it. I speak only for myself, but I am convinced of a few things after the years I have watched Montgomery.

1. Words vs. Actions. A large majority of our Alabama legislators are not in tune with either the U.S. Constitution or their constituents. Oh yes, they say they are. But as I have said many times, don’t listen to what they say - WATCH what they do. There is little difference between our Alabama legislators and those in the Federal scene. “Vote for me! I’ll stand up to them!” “Vote for me because the Democrats are gun grabbers, and together we can stop them!” So, for eight years under Bush, Republicans held both the House and Senate. Can you tell me ONE law that was passed to REMOVE any restriction from our gun rights? “Vote for me; I’m a BIG second amendment supporter” (whatever the heck THAT means). They get elected to office, and nothing happens.

For two more years under Trump, the Republicans held the House and Senate. Again, tell me one law our Republican legislators passed to remove unconstitutional restrictions on our gun rights? Unless a miracle happens, the Democrats are going in, and you watch what they do.

2. Selective Constitutional Support. What has happened to the 2nd Amendment can happen with any of our other constitutional amendments. Our Alabama supermajority of fundamental, Bible-believing, conservative legislators do not really believe in the U.S. Constitution other than the parts that it wants to. I mean, come on! Legislators acted like a drug cartel, passing a gasoline tax in a secret backroom deal and threatening incoming new legislators if they didn’t go along. What happened to integrity and honor? Oh, I know …

3. Support the Blue … Until. I’ll take a beating for this, but I have reached the age that I do not care. I am like Ben Franklin. I have lived a long time and, the longer I live, the more convinced I am that God governs in the affairs of man. If a sparrow cannot fall from the heavens without His knowledge, neither can a nation rise without His aid. Now on to my beating. As long as LE has such a stronghold in Montgomery, we will rarely get anything passed when it comes to gun rights. Why? Because they are not our friends when it comes to passing laws that remove restrictions on the 2nd Amendment. They hate it, especially when money is involved. I watched two years ago as my sheriff (Mike Hale) was hammered by liberal Democrats and RINOs (Republicans In Name Only) in Montgomery on the committee floor. In front of the 100-plus attendees at the committee meeting, an Alabama representative smugly asked Sheriff Hale, “Why aren’t you sitting with your people?” Since Sheriff Hale was sitting with a host of BamaCarry members and other non-uniform wearing people, in the representative's typical liberal mind, we were not “his” people. She thought he should be sitting with the LE people who are against the 2nd Amendment.

Before you come at me with how wrong I am about LE, remember: you are either for or against the 2nd Amendment. If you believe the Constitution gives you the right to infringe on that Amendment, then you are one of them. LE is NOT our friend where it comes to this issue. Stop playing the “blue” game. Support them where you can, but do not compromise what you know to be the truth to “get along.” Remember who will do the dirty work for the government when they say “CONFISCATE” your firearms. That man in blue will tell you, “Nothing personal, just doing my job.” Or my favorite, “I don’t make the law, I just enforce it.” They should NEVER enforce unconstitutional gun law. And all gun law is unconstitutional! It is not negotiable.

Think about it. Our Founding Fathers expressly stated that the government should not "infringe" (the ONLY Amendment using that language) upon the citizens' right to bear arms because they knew we would need this right to defend ourselves from a tyrannical government. Yet this same Amendment is, little by little, being infringed upon and taken away. When you read the Founding Fathers' papers, you get a picture that they knew that, without a way for the citizens to defend themselves, the government would take advantage of the people.

Power corrupts! It did back then, and it does even more so now!

The government has been chipping away at the 2nd Amendment and reducing it from a solid stone to a few pieces of gravel, and once that is done, it will be very easy for them to take away all of our unalienable rights. We will have no way of defending ourselves against them.

And as lawmakers, they will pass laws that they deem necessary to accomplish this! We must stand against them when they show their true colors. They will take advantage of you by being the Trojan horse and calling themselves friends, leaders, and outstanding citizens when they are only corrupt politicians.

It is time that Alabama legislators pass pro-gun laws that will protect us from the coming gun genocide that a Biden administration will bring. Montgomery…wake the heck up!

Photo by steve woods on Unsplash

1 reply on “Are there any believers left in Montgomery?”

Montgomery? One of the most corrupt governments in the United States. Supermajority of Republicans? I call bull squeeze! There are no political parties. We have people who were elected to represent us, yet, when they get elected, they don’t give a flying flip about the Constitution. They are self-centered, immoral, and think it is their duty to legislate as they see fit without consideration of our Constitution and could care less about what ‘We The People’ want and need. We gave them the position to work FOR us, not against us. I for one am fed up with my representatives and will NOT continue to honor them with my vote again so they can continue to pad their billfold/purses and trample my rights.