The Gospel of Gun Rights 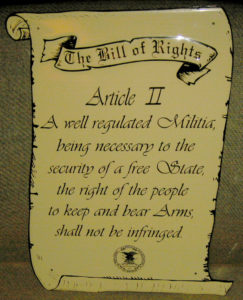 The other day I was speaking with a friend about the lack of knowledge that many Americans possess when it comes to the Second Amendment. This lack of knowledge can be compared to God's people whom God said; "My people are destroyed for lack of knowledge: because thou hast rejected knowledge". We had been talking about the preaching of the Gospel and how one can compare that with the work our gun rights group, BamaCarry, is involved in. We decided that one cannot be a real witness for Christ unless he of course is a Christian and actually studies the scripture, understands it well, and only then will he be able to share the Gospel in a way that people will respond. My friend said that we must evangelize people with the Gospel of Gun Rights. In other words, we must teach people the truth about the basics of the Second Amendment before they will go out and “preach” if you will, the Gospel of Gun Rights.

When it comes to the Second Amendment I think we have probably heard it all. However, I think most people fall into three categories depending on what they think the role of government plays.

I have watched people from all three groups argue, debate, scream and curse each other but when all is said and done the real debate is over who gets to call the shots and control the game. Gun control has always been about people control. There are forces in government that think that they should be able to invade every facet of our lives and infringe on us whenever and wherever they wish as long as it is for the good, as they define good, of the country. They start out with good intentions and end up forcing or attempting to force whatever they decide down our throats. It is nothing short of a tug of war played out between the government and the people. It is a fight over who gets to be master and who is relegated to the part of the servant. As Daniel Webster said,

Ultimately, the Second Amendment right to bear arms serves as a check on the political power of the ruling authorities, and one's personal defense. It is a warning shot over the bow to discourage unlawful violations of our persons or property. You NEED to understand this fully.

Supreme Court Justice William O. Douglas said, “the Constitution is not neutral. It was designed to take the government off the backs of the people”.

We have been so caught up debating whether the Second Amendment allows us to own guns that we've overlooked the most important and most consistent theme throughout the Constitution, the fact that it is not merely an enumeration of our rights, but was intended to be a clear shackle on the government's powers. The second amendment is a clear rebuke against any attempt to restrict gun ownership by citizens and it is necessary for maintaining a balance between the people and the government. It doesn’t “give” us anything but rather reaffirms what the Founders said numerous times and that is that some rights are inalienable, they come from God, and no government has the right to infringe on these rights…period!

“Freedom is never more than one generation away from extinction, We didn’t pass it to our children in the bloodstream. It must be fought for, protected, and handed on for them to do the same, or one day we will spend our sunset years telling our children and our children’s children what it was once like in the United States where men were free.”

We are in for a fight for freedom and liberty. While freedom is something we are born with yet liberty is something we must fight for. Liberty must be granted by an external force. And here's why it’s vital to know the slight but powerful differences of each word… especially these days. America’s Founding Fathers believed freedom was a God-given right. We all know that. But governments restrict one's liberty in order to infringe on ones's rights.

I think my friend is right. Learn the truth about our Constitution. Burn it into our hearts. Then go out and evangelize the country with the Gospel of Gun Rights. Let it start at home, then our neighbors, and then our co-workers. And Then teach them to go and do likewise.

See you in the trenches!

BamaCarry can really use your help right now. We need you to be a part of this army of Patriots. You can join by going here.